Once upon a time, there was a war (in the developer meaning), between Pascal, and another language whose name begin with the V and B initials.

Well that war is over.

As proof look at the following Ohloh chart. While the Archetypal Enemy was set to finally dominate,something happened… though Pascal can’t claim to have escaped unscathed, and the recovery is slow. 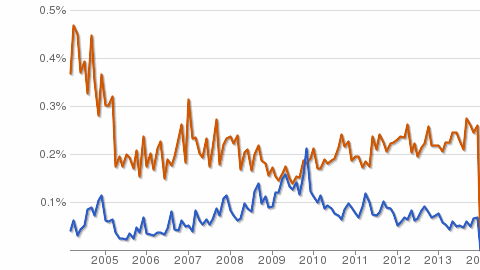 Well, don’t take all of this too seriously, but the slight upward trend should be kept in mind, as it’s not something all other languages can claim (exhibit A), though some have a more upward trend than others (exhibit B).

2 thoughts on “Pascal vs Archetypal Enemy”